Marking the 75th anniversary of VE Day, the end of the war in Europe, we look at what happened to football and footballers in the Second World War. The 1939/40 season kicked off on 26 August, but on Sunday 3 September Neville Chamberlain announced that a state of war now existed between Britain and Germany. On 8 September, the Football Association declared that all football was suspended, except that organised by the armed forces. Footballers were effectively out of work, with their futures uncertain, some elected to join the armed forces or national service organisations. Others sat tight until conscription papers were posted through the door.

On 21 September 1939, the government announced football games would continue but not under the divisions that the game traditionally held season to season. The Wartime League divided the football league into separate regional leagues with reduced attendance numbers. Each season saw the divisions change from region to region, one reason being the lack of availability of footballers to participate. Despite guest players, many football teams still struggled to form a full team and resigned many matches.

Liverpool's legendary manager, Bill Shankly, was playing at Preston North End when the war started. He joined the Royal Air Force and played wartime matches for Arsenal, Norwich, Luton and Partick Thistle, depending on where he was stationed. He even played once for Liverpool in a win over Everton at Anfield in May 1942. Shankly also played seven wartime internationals for Scotland during this period. With the resumption of League football again in 1946, Shankly returned to Preston who held his registration, but he was now coming to the end of his playing days. 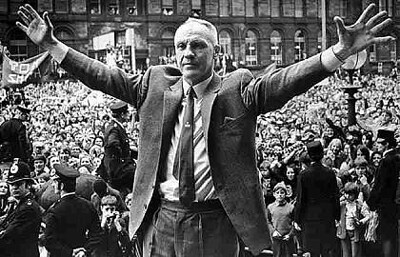 Centre forward Jackie Milburn made his career debut in the Wartime Football League for Newcastle United in 1943, scoring a total of 38 goals in the next three years. Milburn also made guest appearances for Sunderland and Sheffield Utd, due to a player shortages, over ths time. The forward would go on to become one of England's greatest strikers and finished his career as the Magpies' record goalscorer.

On the 9th May 2020 the 'Google Doodle' featured an animated tribute to former footballer Frank Soo, the forgotten former Stoke, Leicester and England player. At just 18 years old, he was scouted by Stoke City F.C., becoming the first professional player of Chinese ancestry in the English Football League. Following the outbreak of World War 2, Soo enlisted in the Royal Air Force, and became the first player of Asian descent to represent England when he played against Wales in 1942. Soo made nine international appearances including the Victory Internationals in 1945, although none were recognised as official caps.