Hull’s 2-1 victory over Notts Forest on Wednesday evening saw them rise four places to 15th in the Championship table.

It's not too late for Hull City Tigers to become promotion contenders. But if they are to get back into the Premiership, they have got to become more consistent. They are ten points behind first-placed West Bromwich and eight points behind second-placed Leeds United. But they are only six points behind the teams in third fourth and fifth, who are all on 22 points.

Six points are only two wins, so it is eminently possible. It’s just that lack of consistency they have to overcome.

Jarrod Bowen’s value to the Tigers cannot be understated. Last season, he was rated the tenth most valuable goal scorer in the Championship. In terms of the players who had been most involved in their clubs’ goal totals, Bowen was listed in 8th position having been involved in 42.5% of Hull City’s goal tally.

So far this season Jarrod is 8th in the list of Championship top goal scorers with six goals and two assists. Topping the list is Fulham’s Aleksandar Mitrovic with 11 goals and Brentford's Ollie Watkins, with eight goals, but neither have any assists registered. Bowen’s goals and assists mean that to date in the current campaign he has been involved in 44.4% of Hull’s goals - even more than last season.

The problem for the tigers though is that nobody else is netting with any regularity. Or are they? Two other players have four goals each to their credit. Kamil Grosicki and Josh Magennis. But Magennis, who has notched up 1165 playing minutes is averaging one goal every 291 minutes. Grosicki has only played a total of 642 minutes, so he is averaging a goal every 162 minutes.

Bowen has played 1289 minutes in total, so his average score rate is a goal every 161 minutes. In other words, in terms of average time, Poland born Grosicki, who has represented his country on 55 occasions, is only 1 minute behind Bowen. This statistic indicates that the Pole needs to be given more match time. 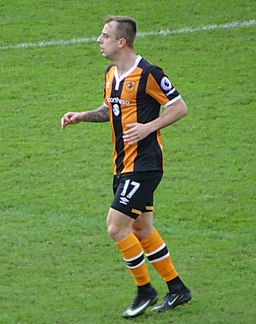 It’s a shame that Grosocki is 31 years old. It means he is well into the twilight of his footballing career. But this fiery winger still has plenty to offer. As goal scoring is a problem for Hull City, especially with their heavy reliance on Jarrod Bowen, Grant McCann needs to take full advantage of Grosocki’s scoring knack.

The Pole has indicated that he is happy to commit his future to the Tigers. However, he is in the last year of his current contract with the club. McCann has the option to extend Grosocki’s contract by another 12 months. However, the winger has indicated that he wants to be offered another 2-year deal, and with his scoring ability, surely, it’s something that Hull should offer him.

You only have to look at Tottenham Hotspur and the lack of consistency and appetite that players like Alderweireld, Eriksen and Vertonghen, who are all out of contract this season, are displaying. It would be a shame to waste Grosocki’s potential in the same way.